The Japanese beetle is an invasive pest that was introduced into the eastern United States over 100 years ago.  Since the early 1900s, the insect has made its way West, moving long distances in nursery stock (root balls of trees, shrubs, and turfgrass plants) sold in trade and about 1 to 5 miles per year on its own from plant to plant.

The Japanese beetle was first introduced into Colorado in the early 1990s from nursery stock purchased in the mid-western United States.  Scientists and experts were caught off guard by the ability of the pest to establish itself in our region, thinking that Japanese beetle, an insect that likes moisture and humidity would never become a problem in the semi-arid Colorado climate.  However, our urban landscape areas are oases of green, irrigated plant material that the beetle loves to eat and thrive in.

Precautions need to be taken to keep this pest from spreading to noninfested areas of the State. Why?  Japanese beetle adults are voracious feeders and cause significant damage to over 300 different plant species found in our landscapes, our agricultural areas, and a few of our native plants as well!

For homeowners, landscape managers and Colorado agriculture producers this pest is also devastating.  Damage done to ornamentals, grasses and fruit crops in Colorado can be significant.  Integrated control strategies are highly encouraged.

Over the past 9 years, Colorado Department of Agriculture has focused its Japanese beetle prevention efforts on an external quarantine and monitoring nursery stock imported into Colorado from the midwest and eastern US sources.  While mostly successful, in 2017 with the Nursery Industries’ support, the first internal quarantine of a Japanese beetle infested area within the State of Colorado was adopted.  We must work together to expand our focus on the potential movement of this insect from the Denver metro area to other un-infested areas of the State.

Where is the Japanese Beetle in Colorado?

Each year CDA places Japanese beetle traps in nurseries, parks, golf courses, areas of agriculture and horticulture production to monitor for the pest and keep track of distribution.  CDAs primary purpose for trapping Japanese beetle is to support trade and certification of Japanese beetle free nursery stock and protect un-infested areas of Colorado and the Western U.S.

In July 2022, more than 230 beetles were trapped in the Appleton neighborhood of Grand Junction, Colorado. CDA is working with CSU Extension, Mesa County, the City of Grand Junction, and the Upper Grand Valley Pest Control District to draft an eradication plan for the invasive pest. You can read more about the response here.

People who live in Mesa County are encouraged to monitor their plants and turf for the presence of the Japanese Beetle. Any sightings of the pest should be reported to the Japanese beetle helpline at 970-248-7000 or through the contact form below.

Questions about the Japanese beetle, its life cycle, and how to participate in the 2023 citizen scientist Japanese beetle trapping program can be directed to the CSU Extension office at 970-244-1834.

The map below contains Japanese beetle population data collected from 1990 – 2021. 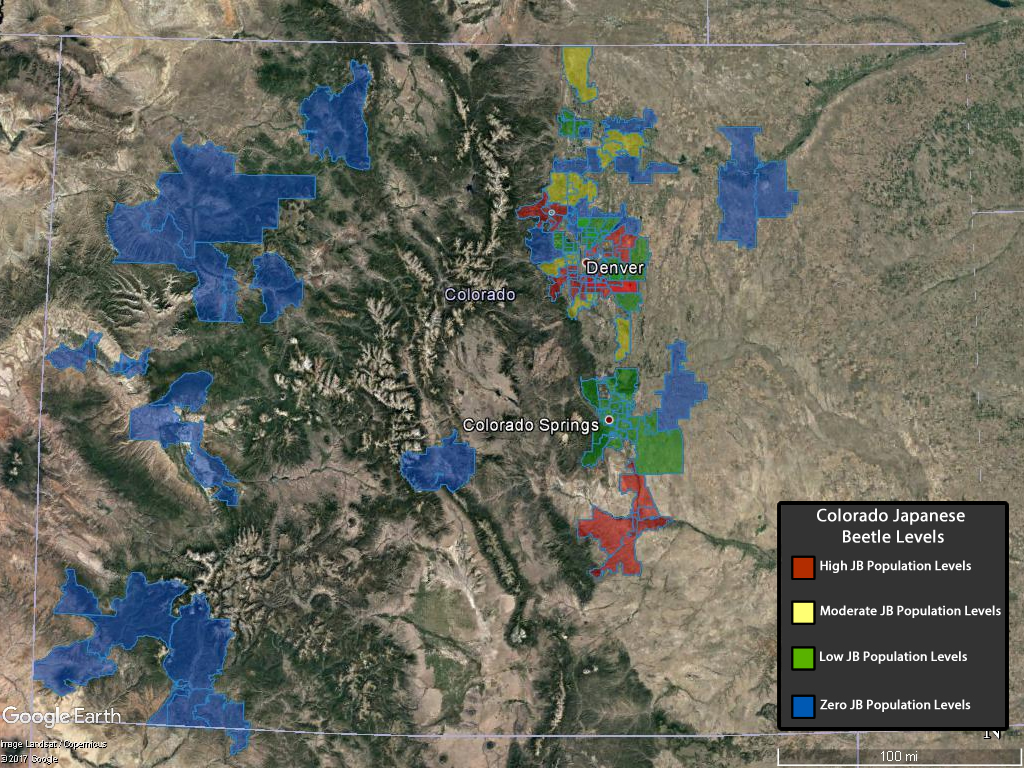 The Colorado Nursery Act, Title 35-26 and its’ associated Rules (8 CCR 1203-5) exist to protect consumers and the environment from the introduction of pests.  Nursery stock can harbor and vector plant pests and diseases.  Unregulated production and shipping of nursery stock present an unacceptable risk to the state’s agricultural, forestry, and horticultural interests and to the State’s general environmental quality.  Therefore it is necessary to ensure that nurseries produce healthy plants and that nursery stock shipped to other nurseries, brokers, and out-of-state customers meets the national nursery stock cleanliness standard.

The Nursery Act specifies that it is illegal to move or sell plants within the state or outside the state infested with pests, diseases, and weeds.

The Japanese beetle Quarantine, 8 CCR 1203-21, adopted at the request of the Colorado Nursery and Greenhouse Association (CNGA) in 2010, helps slows the progression of the insect and prevent new Colorado introductions.  Nursery stock may only enter Colorado if treated with certain insecticides or certified to be Japanese beetle free.  Recently the  Agriculture Commission adopted a proposal to expand our State’s quarantine to include the Colorado counties of Pueblo, El Paso, Douglas, Arapahoe, Jefferson, Denver, Boulder, Broomfield, Adams, Weld and Larimer to prevent spread of the pest from known infested areas in Front Range to locations in eastern Colorado and the West Slope.  Effective December 30, 2016, nurseries and landscape contractors in Front Range counties now need to make sure plant material that is grown or held within the Front Range is certified Japanese beetle free before transporting to other areas of the state.